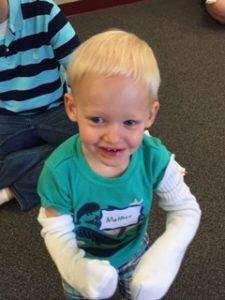 Last night in my final Kindermusik summer class, “Zoo Train,” my little cuties were heavily “into” exploring every single thing in our classroom other than all the things I had intended for us to explore: a tiny, random little bucket hung on the wall just above toddler reach (that so perfectly held little sunglasses worn to class!), the attendance stickers, the magnets on the white board, the monkey decorations hanging from the ceiling, and, especially, making their way underneath the teaching table that was covered with attractive zoo animal fabric (meant to keep kids from going underneath ☺). It seems that their parents and I spent lots of time trying to channel their curiosity towards our class agenda, and we were relatively successful – let’s play sandblocks to the Zebra music, and be penguins with hula hoop puddles, put socks on our arms like polar bears, etc., but, ultimately, those were our (my) choices, not theirs. And while my choices were fun and helped them to explore the musical subject matter at hand, it occurred to me, as I watched parent after parent tying to “lead the horses to water,” so to speak, that we spend a lot of time channeling our kids towards our desires, and need to, as often as we can, follow them and their ideas. And we need to SEE their ideas as a valid means to explore the world around them. So, at the end of class, when it was time to sing goodbye, and going underneath the table was still on their agenda, I simply lifted the covering to reveal the magical underside (not!) and said, “OK, come on, let’s go!!” and whisked them all underneath with me. The look on the first little one’s face told me I had made the right decision – “WHAT??? You’re going with it? MY IDEA? And I get to see what’s under there?” It was priceless. Of course, the novelty soon waned as the kids discovered that there was really nothing exciting underneath that table. But they were allowed to follow their passion and make their own discovery, rather than being repeatedly forbidden from pursuing their curiosity, which would only have resulted in repeated power plays and frustration. And what about this philosophy applied to interest in the bucket on the wall? Instead of a distraction that is quickly removed and hidden, it becomes: “YES! What a great place to keep your sunglasses! Good for you, Matthew, for discovering it!” (This Mommy and Daddy actually DID go right with this idea, and it became just a fun little adventure throughout the class. It was wonderful to watch).

Play is the child’s work! I can’t remember who said it, but it is one of my favorite quotes to this day. I use it often. Just this week I reminded 100 Head Start teachers who work with at risk children that they need to play more with the kids they serve, ESPECIALLY at the young pre-school ages (birth to five). To be playful is to have fun, and to follow your child – to let THEM lead the way in discovering, and not to impose OUR ideas on them. As I was thinking about my precious class last night (while pooped on the couch from a long week, and it was only Wednesday!), I was reminded of some of the best parenting advice I ever got: Say YES as often as you can! YES! YES! YES! It seemed funny at the time, but I recall realizing that it was the exact opposite of what I was inclined to do. Our toddlers or preschoolers are going full speed ahead during every waking hour, eager to explore the world around them, and EXCITED that they have the capacity (control) to do so. Our immediate response, as the parent of those radical young detectives, is to try to reel them in, usually in the name of keeping them from destroying anything or from having accidents, and, if the truth be known, often just to keep our own worlds a bit neater and tidier. But the young child NEEDS to “tear it up” to figure it out. And our yeses, and even jumping right in to explore alongside of them, fuel their minds to learn faster, as we allow them to capitalize on their interests and energies. New experiences yield new neural connections in the brain, and, when it’s their idea, the connections are stronger and cemented as their interest spurs them to repeat the experience time and again. Simply put, engaged play builds the brains of the young child!

I think I learned and practiced this “yes lesson” best with my youngest child, “Baby Grace,” who is now 18, and in a short week from now, headed off to college. Her passion for “all things green,” for instance, sometimes got her, and me, into trouble at the age of three (just see the picture), but today she is a vibrant, curious, creative, confident young woman who is ready to take the world by storm. 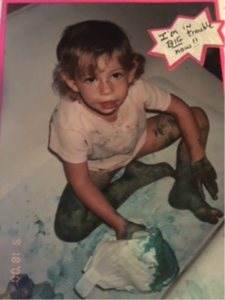 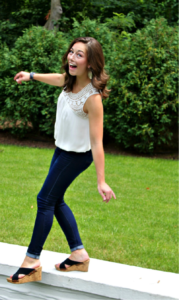 While, at the ripe old age of two or three, their ideas might seem senseless to you – putting mismatched shoes on, crawling into the laundry basket, putting rocks instead of ice cubes into drinking glasses, taking every single item out of the corner lazy susan in your kitchen – these are the ideas that, if allowed to come to fruition, become the adult ideas of a future generation of entrepreneurs, creative thinkers, doctors, lawyers, teachers, and, ultimately, the “yes-sayer” parents of tomorrow.