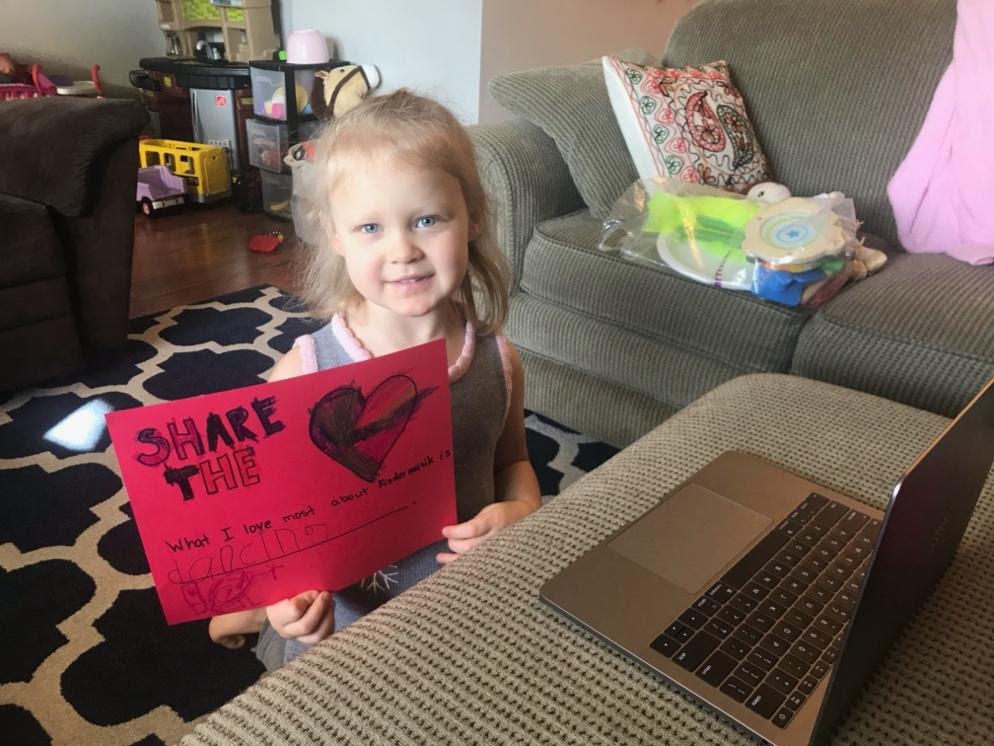 Every February we celebrate our love for Kindermusik at the Music Connections studio. This year my family is attending class virtually and, like most celebrations or traditions in this year of the pandemic, we won’t be at the studio to celebrate. However, my family’s love for Kindermusik is as strong as ever, and we will still tell everyone we know how much it has meant in our lives.

Each week when our four year old finds out it is time for Kindermusik, we get the same response: she shouts “Yay,” followed by her own little celebratory dance. Because of how the Kindermusik curriculum has prepared her socially and emotionally, she is, at this point in her Kindermusik journey, “attending” class mostly independently. However, as a curious mama, who loves watching her kids when they don’t realize she’s looking, I peek in and watch her interact with her teacher and classmates. It is the best show I’ve ever watched!

It’s so awesome to watch her teacher imagining and playing alongside her students to spur their creativity and ideas. My daughter sings, plays instruments, follows instructions, and makes believe - all without me. Her teacher, Ms. Angela, is so amazing as she scaffolds with them to build on their ideas. Today as I peeked in I noticed my daughter melting down a bit, with a couple of other students following suit. Within seconds, as if planned, Ms. Angela was coaching them how to deep breath and transition into a quiet time. My daughter was learning something more important than anything else she learned that day, how to self soothe! This was an awesome moment to watch and one of the many times I’ve realized how important Kindermusik has been in my child’s development. These are skills she will use for life!

Kindermusik is more than just a music and movement curriculum. It’s about teaching kids how to interact with others, love themselves, play with imagination, problem solve, and so much more - things that help them become such diverse little people. In short, it is whole child development packaged in engaging, interactive fun that keeps kids (and parents) wanting to come back for more. I’d heard it described as “broccoli packaged up as ice cream.” I couldn’t imagine our lives without the guidance Kindermusik has provided. It’s shown me how to play with my kids, teach my kids, model good behaviors and, in short, to become a better parent. We love Kindermusik!